For centuries travelers have been drawn to the stunning and mysterious Dead Sea and Jordan River, a region which is unlike any other on earth in its religious and historical significance. In this exceptionally engaging and readable book, Barbara Kreiger chronicles the natural and human history of these storied bodies of water, drawing on accounts by travelers, pilgrims, and explorers from ancient times to the present. She conveys the blend of spiritual, touristic, and scientific motivations that have driven exploration and describes the modern exploitation of the lake and the surrounding area through mineral extraction and agriculture. Today, both lake and river are in crisis, and stewardship of these water resources is bound up with political conflicts in the region. The Dead Sea and the Jordan River combines history, literature, travelogue, and natural history in a way that makes it hard to put down.

BARBARA KREIGER is Creative Writing Concentration Chair and Adjunct Associate Professor in the Master of Arts in Liberal Studies program at Dartmouth College. Her other publications include Divine Expectations: An American Woman in Nineteenth-Century Palestine. Her work has appeared in the New York Times, Boston Globe, Smithsonian Magazine, and other publications.

This chapter focuses on water policy reforms and the introduction of a new water pricing policy in Israel. These reforms have to be seen in combination with measures to extend the available water sources that have been introduced in Israel in recent years. The effects of the Israeli demand and supply management policy on the use and availability of the water resources is investigated, and the potential transferability of the Israeli experiences to other countries in the region is examined. We also discuss the contribution of the water policy reforms as part of possible options and alternatives to the planned RSDS Conveyance Project. 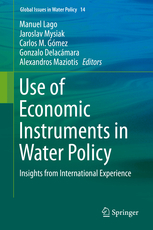 As in many European countries, all water sources in Israel are public property, and are centrally managed by the government. This is to facilitate correction of market failures associated with externalities, natural monopolies and equity considerations. The economic policy instrument (EPI) considered here comprises two aspects of the centralized approach: (1) an institutional reform: local services that were formerly provided by municipal water departments became the responsibility of corporations; (2) a price-scheme reform: urban water prices are set by the regulator subject to the constraint of overall cost-recovery at the national and municipal levels, combined with an egalitarian policy; the latter is realized in identical municipal end-users tariffs. We evaluate the environmental, economic and institutional aspects of these reforms, and point out two main conclusions. First, with respect to EPI implementation from the regulator perspective, the lesson learned can be summarized by the phrase “grasp all, lose all.” EPI reformation, in this case the establishment of regional corporations, should take account of unattainable objectives: “sanitizing” the political factors from involvement. The second lesson is associated with the challenge of designing a pricing mechanism that simultaneously achieves several potentially contradicting targets: costs recovery, creation of incentives for efficiency, and equality. Also here the mechanism was distorted by political pressures. According to the social norms as they are reflected by the resultant policy, equality overwhelms efficiency.

The importance of offshore submarine fresh groundwater bodies as well as of submarine groundwater discharge (SGD) became commonly recognized in the recent years for groundwater management. The existence of submarine fresh groundwater bodies extending offshore to distances between a few meters to several tens of kilometers was reported all over the world and SGD was detected and studied also in the eastern Mediterranean, offshore Israel. The Mediterranean coastal aquifer of Israel is one of the main groundwater resources of the country. It has been exploited heavily and, as a result, the quality of water is gradually deteriorating. It is well known that the aquifer is grouped into four subaquifers, which were managed separately. The upper two sub-aquifers are known to be subjected to lateral seawater intrusion and to pollution from above whereas the lower ones are assumed to be, in places, blocked to the sea. For a long time, geoelectric and, particularly, geoelectromagnetic methods were leading geophysical techniques in solving various hydrogeological problems related to the characterization of groundwater salinity. This is due to a very close relationship, which exists between the salinity and electrical resistivity measured by the methods. In order to explore fresh groundwater below the sea the Long Offset Electromagnetic (LOTEM) method, which uses grounded lines (electric dipoles) as both transmitter and receiver antennae, is applied in the marine environment. The presented work is part of a Joint German-Israeli project, funded by the German Federal Ministry of Education and Research (BMBF) and the Israeli Ministry of Science, Technology and Space (MOST). The LOTEM measuring system from the Institute of Geophysics and Meteorology, University of Cologne is applied for the first time in the marine environment. Although marine Time Domain electromagnetic methods with a horizontal transmitter dipol are used by the oil-industry or other university working groups for similar targets, it was never reported, besides by the Israeli project partner Geophysical Institute of Israel, to be applied to such shallow waterdepths up to a maximum of 50 m. The main goal of this thesis is to detect the submarine aquifer and to examine its lateral dimension.