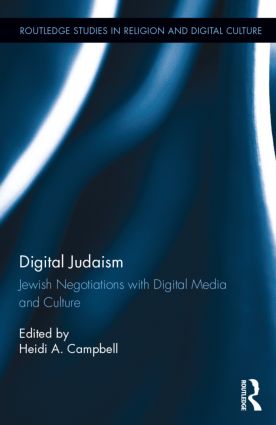 In this volume, contributors consider the ways that Jewish communities and users of new media negotiate their uses of digital technologies in light of issues related to religious identity, community and authority. Digital Judaism presents a broad analysis of how and why various Jewish groups negotiate with digital culture in particular ways, situating such observations within a wider discourse of how Jewish groups throughout history have utilized communication technologies to maintain their Jewish identities across time and space. Chapters address issues related to the negotiation of authority between online users and offline religious leaders and institutions not only within ultra-Orthodox communities, but also within the broader Jewish religious culture, taking into account how Jewish engagement with media in Israel and the diaspora raises a number of important issues related to Jewish community and identity. Featuring recent scholarship by leading and emerging scholars of Judaism and media, Digital Judaism is an invaluable resource for researchers in new media, religion and digital culture.

HEIDI A. CAMPBELL is Associate Professor of Communication at Texas A&M University and Director of the Network for New Media, Religion and Digital Culture Studies. She is author of Exploring Religious Community Online (2005) and When Religion Meets New Media (2010) and editor of Digital Religion: Understanding Religious Practice in New Media World (2013).

Sharaby, Rachel, and Aviva Kaplan. “Between the Hammer of the Religious Establishment and the Anvil of the Ethnic community. Rabbis of Ethiopian Immigrants in Israel.” Journal of Modern Jewish Studies 14.3 (2015): 482-500.

This article examines the ambivalent status of rabbis of communities of Ethiopian immigrants who serve within the framework of the religious establishment in Israel. On the one hand, they function in their communities as spiritual leaders who are committed to Jewish law and act as representatives of the religious establishment. On the other, they belong to an excluded ethnic community which perceives them as traitors. Our findings indicate that the marginal status of the Ethiopian rabbis prevents their inclusion and strengthens components of their ethnic identity. Thus, diverse behaviour patterns and various syncretic combinations between religious and cultural elements have been created in their identity.

In the summer of 2011, a number of soldiers walked out of an auditorium in which a musical performance was taking place. The men, cadets in an officer’s course, explained that they walked out of the performance because there were female vocalists, and the halacha prohibits men from listening to females sing.

As a result of this incident, representatives of the army chief rabbinate as well as the Matka’l, or Israeli General Staff, convened to discuss and ultimately publish new guidelines addressing the participation of religious soldiers in military ceremonies featuring female vocalists. These new guidelines were in turn criticized by a group of army chaplains united under the name “Keren Lahav—for the strengthening of Judaism in the IDF.” The group published a joint document in which they stated that the army’s decisions had undermined the trust of religious soldiers in the system. They claimed that the new guidelines—which were approved by the IDF’s Chief Rabbi Rafi Peretz—demonstrated Peretz’s ignorance of the inner workings of the army system. One criticism against Rabbi Peretz was that he had not risen to his position from within the military but rather was an outside candidate placed directly at the top of the pyramid.

Eliezer Goldman (1918–2002) had a significant, though seldom recognized, impact on the way that contemporary religious Jews deal with the implications of modernity. Perhaps his most far-reaching contribution was his philosophy of halacha. Goldman was hardly alone among religious thinkers in proposing halachic responses to the constitutional, technological, and ethical dilemmas posed by the establishment of the State of Israel. He was, however, distinctive in two respects. First, he was one of the few Jewish thinkers in the mid-twentieth century who mapped out the basics of a halachic jurisprudence in a Western idiom. To be sure, others had described certain aspects of Jewish law in Western terms. However, Goldman was rare in that he articulated a broad philosophy of halacha in an attempt to explain the mechanisms of halachic change. To do so, he showed that halacha is made up not only of concrete rules but of abstract principles that guide its development. To describe these principles, he invented the term “meta-halacha,” that continues to enjoy great currency among contemporary Jewish thinkers.2 Second, Goldman was unusual among religious Zionists in that his thought was deeply influenced by streams in twentieth-century American thought. In particular, his theology and his halachic jurisprudence drew heavily on American philosophical pragmatism and legal realism. This gave Goldman’s writing an idiosyncratic twist and contributes to its ongoing resonance with the contemporary reader.