This study focuses on two exceptional moments in the Egyptian–Israeli history of conflict: the visit of President Anwar Sadat to Jerusalem in November 1977 and the signing of the Israeli–Egyptian peace treaty in March 1979. Combining peace studies, cultural studies and discourse analysis, the article analyzes the response of Israeli most popular children’s periodicals to these dramatic peace events in real time, during the months in which they occurred. The article’s contribution to peace research lies in its ability to shed light on how intergenerational discourse conveys peace legacy, a relatively neglected arena in peace research. In doing so, it likewise focuses on the discursive ‘failures’ embedded in the Israeli peace discourse. 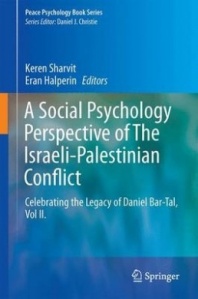 The Israeli-Palestinian conflict has been waging for decades, resulting in mass losses, destruction, and suffering with profound effects on the members of the involved societies. Furthermore, its effects reach beyond the involved societies and influence regional and global stability. Many attempts have been made to bring this conflict to peaceful resolution, but so far without success. Due to its intensity and extensive effects, this conflict has drawn the attention of scholars from numerous disciplines, who attempted to explain the causes of the conflict and the reasons for the difficulties in resolving it. Among these one can find historians, geographers, political scientists, sociologists, and others. Social and political psychologists have also addressed this conflict, and one of the most influential among them has been Daniel Bar-Tal.

This is the second of two volumes intended to pay tribute to Daniel Bar-Tal’s scholarly contribution upon his retirement from his position at Tel Aviv University. While the first volume was devoted to Bar-Tal’s general theory of the sociopsychological foundations of intractable conflict and the theory’s relation to other prominent theoretical frameworks, this volume is devoted to applying Bar-Tal’s theory to the specific case of the Israeli-Palestinian conflict. In his most recent book, published in 2013, Bar-Tal acknowledges the immense effects that living in Israel, being exposed to this conflict, and taking part in it have had on his thinking, theorizing, and empirical research regarding intractable conflicts. We too, as his former students, have been inspired by living in Israel and by Bar-Tal’s work to continue to investigate the sociopsychological dynamics of the Israeli-Palestinian conflict and through them to advance the understandings of intractable conflicts in general.