When public agencies seek to privatize a service, a commissioning process begins wherein public sector budgeters must decide how generous the funding will be while taking occupational standards into account so that the quality of service is assured. One important area of occupational standards is the required personnel and job sizes of certified employees. Not enough attention has been directed to how occupational standards’ related knowledge is treated in the process. Purpose: Firstly, investigating how the commissioning process is experienced by Israeli, often female, occupational standards administrators. Secondly, proposing a gendered perspective on Sennett’s corrosion of character thesis. As part of an institutional ethnography project, 16 interviews were conducted with (14 female and 2 male) occupational standards administrators at the Israeli Welfare, Education and Health Ministries. The routine of commissioning involves a stage of using occupational standards’ knowledge and experience, and a stage of dismissing it. The ‘corrosion of character’ embedded in the dismissal stage undermines historical achievements in the area of recognizing caring work and skills. While Sennett’s thesis has already been found plausible for understanding public servants’ experiences of the “new public management”, until recently, not enough attention has been devoted to the commissioning processes’ gendered implications for contract-based delivery of services. This paper examines these implications for the power struggle between the feminist achievements protecting skill recognition in caring occupations, and policy makers. 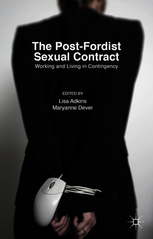 I forward an analysis of the process of preparing contracts themselves prior to service operation, and the negotiations between various public sector administrators that shape employees’ job quality. I make use of Dorothy Smith’s (2005) methodology of institutional ethnography for the purpose of understanding how job quality is shaped for both certified and uncertified employees in the social services commissioned by the Israeli Welfare, Education, and Health ministries.

Abstract
Objective. Recent years have seen a global trend of declining immunization rates of recommended vaccines that is more pronounced among school-age children. Ethnic disparities in child immunization rates have been reported in several countries. We investigated an effect of ethnicity on the vaccination rates of immunizations routinely administered within schools in Israel. Design. Data were collected from the Ministry of Health database regarding immunization coverage for all registered Israeli schools (3736) in the years 2009–2011. Negative binomial regression was used to assess the association between school ethnicity and immunization coverage while controlling for school characteristics. Results. The lowest immunization coverage was found in Bedouin schools (median values of 75.1%, 81.5% and 0% for the first, second and eighth grades, respectively) in 2011. During this year, vaccination coverage in the first and second grades in Jewish schools was 1.51 and 1.35 times higher, respectively, compared to Bedouin schools. In the years 2009 and 2010, no significant increase in risk for lower vaccination rate was observed in Bedouin schools, and children in Arab and Druze schools were more likely to have been vaccinated. Conclusion. The lower vaccination refusal rate found in Bedouin schools supports the hypothesis that difficulties related to accessibility constitute the main problem rather than noncompliance with the recommended vaccination protocol for school-age children, featuring higher socio-economic status groups. Our study emphasizes the importance of identifying, beyond the national-level data, subpopulation groups at risk for non-vaccination. This knowledge is essential to administrative-level policy-makers for the allocation of resources and the planning of intervention programs.

A 2014 external review of medical schools in Israel identified several issues of importance to the nation’s health. This paper focuses on three inter-related policy-relevant topics: planning the physician and healthcare workforce to meet the needs of Israel’s population in the 21st century; enhancing the coordination and efficiency of medical education across the continuum of education and training; and the financing of medical education. All three involve both education and health care delivery.

The physician workforce is aging and will need to be replenished. Several physician specialties have been in short supply, and some are being addressed through incentive programs. Israel’s needs for primary care clinicians are increasing due to growth and aging of the population and to the increasing prevalence of chronic conditions at all ages. Attention to the structure and content of both undergraduate and graduate medical education and to aligning incentives will be required to address current and projected workforce shortage areas. Effective workforce planning depends upon data that can inform the development of appropriate policies and on recognition of the time lag between developing such policies and seeing the results of their implementation.

The preclinical and clinical phases of Israeli undergraduate medical education (medical school), the mandatory rotating internship (stáge), and graduate medical education (residency) are conducted as separate “silos” and not well coordinated. The content of basic science education should be relevant to clinical medicine and research. It should stimulate inquiry, scholarship, and lifelong learning. Clinical exposures should begin early and be as hands-on as possible. Medical students and residents should acquire specific competencies. With an increasing shift of medical care from hospitals to ambulatory settings, development of ambulatory teachers and learning environments is increasingly important. Objectives such as these will require development of new policies.

Undergraduate medical education (UME) in Israel is financed primarily through universities, and they receive funds through VATAT, an education-related entity. The integration of basic science and clinical education, development of earlier, more hands-on clinical experiences, and increased ambulatory and community-based medical education will demand new funding and operating partnerships between the universities and the health care delivery system. Additional financing policies will be needed to ensure the appropriate infrastructure and support for both educators and learners.

If Israel develops collaborations between various government agencies such as the Ministries of Education, Health, and Finance, the universities, hospitals, and the sick funds (HMOs), it should be able to address successfully the challenges of the 21st century for the health professions and meet its population’s needs.

Background
Tobacco is the only consumer product known to kill half of its users, and is a significant cause of death and disability to exposed nonsmokers. This presents a unique conundrum for modern democracies, which emphasize personal liberty, yet are obligated to protect citizens.

Aim
This paper provides an overview of tobacco policy in Israel since the inception of the State, presents the development of the National Tobacco Control Plan, and recommends future actions.

Methods
Sources for this article included the Knesset (Israeli Parliament) and Ministry of Health websites, Health Minister Reports to the Knesset on Smoking, and the scientific literature.

Results
Israel has an impressive record on tobacco control policy, beginning with taxation in 1952, landmark smoke-free air and marketing legislation in the early 1980’s, tax increases and expansions of smoke-free air and marketing legislation in the ensuing years, and the addition of subsidized smoking cessation technologies in 2010. Until 2011, actions were taken by various organizations without formal coordination; since the passage of the National Tobacco Control Plan in 2011, the Ministry of Health has held responsibility for coordinating tobacco control, with an action plan.

The plan has been partially implemented. Smoke-free air laws were expanded, but enforcement is poor. Passage of critical marketing and advertising restrictions is stalled. Requested funds for tobacco control did not materialize.

Recommendations
In order to prevent hundreds of thousands of preventable premature deaths in the coming decades, Israel should considerably strengthen tobacco control policies to include: guaranteed funding for tobacco control; strong curbs on advertising, promotion and sponsorship of tobacco and smoking products; public education; law enforcement; protection of children from exposure to tobacco; regulation of electronic cigarettes and other alternative harm-reducing products; tobacco control research; and systematic monitoring of, and periodic updates to, the National Tobacco Control Plan. Israel should also begin discussions of Endgame scenarios, and consider abolition of tobacco, as it continues its progress towards making smoking history.

Substance-related disorders are a major public health problem, requiring the development of primary and secondary prevention programs. The Department for the Treatment of Substance Abuse in the Israeli Ministry of Health maintains an administrative database that includes information on all patients enrolled in substitution programs for substance-related disorders. The Israel National Substance Abuse Treatment Registry (INSATR) was introduced in 1996 to ascertain demographic and clinical characteristics of patients, treatment details and legal data that can contribute to the improvement of care coordination, improved population health outcomes and more robust research data for epidemiological, clinical and service policy research. The aim of this report is to describe the INSATR and illustrate its benefits through a review of the findings of INSATR-related clinical trials and linkage studies to other national registries: the National Psychiatric Hospitalization Registry, National Cancer Registry and National AIDS Registry. The INSATR has demonstrated meaningful use in the assessment of quality of care and quality assurance, and in public health service policies research directed to the development of secondary prevention programs for individuals with substance-related problems in the community.

How do ministry of Finance (MOF) bureaucrats preserve their dominance in the national budget process? As we all know, MOF bureaucrats are important in politics and policy, we know much less about exactly how they play their role. Political analysis of the interaction between politicians and bureaucrats in the Israeli healthcare policy arena reveals asymmetry of information in favour of the bureaucrats at the MOF. Among others, this asymmetry is also due to a lack of transparency in the national budgeting process. While presenting the balance of power between the players in the Israeli health policy arena, we point to the MOF bureaucrats as the most dominant players – though their power is not absolute as it always seems. Quite a few indications point at ‘non-democratic’ strategies made by these bureaucrats in their interactions with the other players. The empirical findings show that alongside bureaucrats’ expertise, strategies based on concealment, manipulation in presentation of information, lack of transparency and ‘Buying’ politicians (bribe for budgets) establish the dominance of MOF’s bureaucrats in the policy arena. Under the structural conditions of centralisation, the other players tend to find alternative solutions for promoting the public policies they seek.