Burton, Guy. “Explaining Beijing’s Shift from Active to Passive Engagement in Relation to the Arab-Israeli Conflict.” Sociology of Islam 4.2 (2016): 93-112.

As a ‘rising power’, China is expected to play a greater global role. But current Chinese involvement in the long-running and internationalised Arab-Israeli conflict is limited. How to explain this? What does it suggest about China’s regional and global role? Studying Beijing’s involvement since the 1950s, I note Chinese military assistance to the Palestinians during the 1960s-70s and strong criticism of Israel. But from the 1980s Beijing adopted a more diplomatic approach and endorsed the two-state solution. The change was due to China’s broader regional and international relations. During the Cold War Beijing’s ‘active’ pro-Palestinian stance was associated with being ‘outside’ the superpower-dominated international system. By the end of the Cold War Beijing was ‘inside’ the international system and increasingly integrated into the global economy. Commercial considerations trumped political ones, emphasising diplomacy. This suggests China’s exercise of global power may be more nuanced and less overt than otherwise assumed. 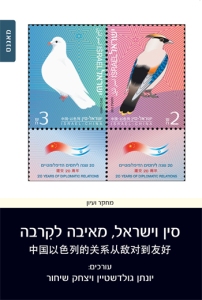 In January 1950, Israel was the first country in the Middle East and the seventh in the non-communist world who recognized the PRC. Israel did not promote the establishment of diplomatic relations, mainly because of pressure from the US and fears of Chinese communism, while China avoided their promotion because it favored relations with the Arab and Muslim world. Only 42 years later, in January 1992, the two countries established diplomatic relations. Despite the geographic, cultural, and political distance between Israel and China, today the ties between the two countries are flourishing, especially but not exclusively in the financial arena. This volume includes articles dealing with the connection between the two countries before the establishment of diplomatic relations and afterwards. Among other things, it discusses the historical and Jewish background, diplomatic aspects, Asian and the Middle Eastern contexts, the role of the Communist Party, the process of establishing relations, international, military, and economic dimensions of these relations, as well as the development of relations between Israel, Hong Kong and Taiwan. The authors reflect a combination of the academic world of research and the practical world of diplomacy.

The book deals with the relations between Israel and China and their dramatic change from enmity and lack of contact to friendship and closeness. The articles are based on documents and primary sources as well as personal experiences. In addition to the references in every article, the book includes a reading list of publications which do not appear in it. The book, which is a new version of a previous edition published in English in the late nineties, includes new sources and additional and updated articles that refer to relations between the two countries to this day. It is intended for students and a general readership, both professional and unprofessional.

Since the early 2010s, there have been mounting calls in China to intensify its role in the Middle East. But seeing the region as highly turbulent, Beijing seems to restrain its political involvement there. So what role does China actually strive for in the Middle East? To answer this question, the article first presents China’s discourse on its future role in the region; next, it analyzes China’s involvement in the Israeli–Palestinian conflict and the Syrian civil war, focusing on three diplomatic initiatives it has made concerning these issues. The argument here is that China strives to be part of major processes in the Middle East and attempts to advance its values and interests there, but in a unique pattern of big-power involvement in the region, it tries to achieve this without intensive investment of political, economic, and military resources.

Abstract
The purpose of this article is trying to answer the following question: What else a State needs to consider, besides its international legal obligations, when developing its foreign policy? I hope to demonstrate how factors such as religion and realism affect a country’s foreign policy by using the case of Israeli-Palestinian conflict and China’s interactions with the two nations. China successfully adapt realistic attitude in making its middle-east policy. It supported Palestine for the ideology of anti-imperialism, but established relation with Israel for the need of national interest. In this article, I would give a general introduction of the history of China’s relation with Palestine and Israel, including several key incidents that carry great significance in this triangular relationship. Through my introduction, I hope to demonstrate how religion and realism affects a nation’s foreign policies, as well as international law. I would discuss China’s involvement in the Israeli-Palestinian conflict from the perspective of international relations. First, I will focus on the changes and evolvements of China’s relationships with Palestine and Israel throughout history, and briefly discuss what China has done in the past with the two countries. Second, I will introduce how Chinese society views the Israeli-Palestinian conflict. In the end, proposals will be made for China’s future policy in the region.

Although studies on China’s Middle East policy frequently separate Israel from the rest of the region, Beijing has always been aware of regional contradictions and tried to navigate between the two sides it perceived as interconnected. China’s attempts to adopt a balanced relationship with both sides in the 1950s were later replaced by a zero-sum game policy in which Israel was totally excluded. Since the 1980s Beijing has resurrected its balanced Middle East policy. While still sticking to nonintervention in regional conflicts, the Chinese implicitly offer their own experience of using economic means to overcome sociopolitical tensions.