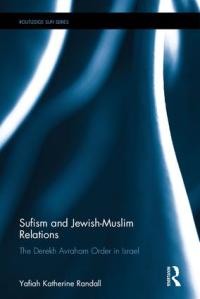 In Israel there are Jews and Muslims who practice Sufism together. The Sufi’ activities that they take part in together create pathways of engagement between two faith traditions in a geographical area beset by conflict.

Sufism and Jewish Muslim Relationsinvestigates this practice of Sufism among Jews and Muslims in Israel and examines their potential to contribute to peace in the area. It is an original approach to the study of reconciliation, situating the activities of groups that are not explicitly acting for peace within the wider context of grass-roots peace initiatives. The author conducted in-depth interviews with those practicing Sufism in Israel, and these are both collected in an appendix and used throughout the work to analyse the approaches of individuals to Sufism and the challenges they face. It finds that participants understand encounters between Muslim and Jewish mystics in the medieval Middle East as a common heritage to Jews and Muslims practising Sufism together today, and it explores how those of different faiths see no dissonance in the adoption of Sufi practices to pursue a path of spiritual progression.

The first examination of the Derekh Avraham Jewish-Sufi Order, this is a valuable resource for students and scholars of Sufi studies, as well as those interested in Jewish-Muslim relations.

YAFIAH KATHERINE RANDALL received her PhD at the University of Winchester. She combines academic research into Jewish-Muslim relations focusing on Sufism with grass-roots action for interreligious understanding and conflict transformation.