Benski, Tova, and Ruth Katz. “Women’s Peace Activism and the Holocaust: Reversing the Hegemonic Holocaust Discourse in Israel.” In The Holocaust as Active Memory: The Past in the Present (ed. Marie Louise Seeberg, Irene Levine, and Claudia Lenz; Abingdon and New York: Routledge, 2013, reprinted 2016): 93-112. 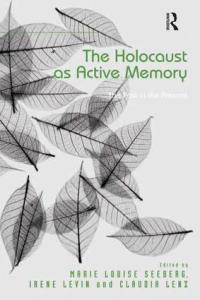 The present chapter focuses on Holocaust discourse among activists of the Coalition of Women for Peace, and is an unexpected outcome of a longitudinal study of women’s peace movements in Israel since the late 1980s. The chapter is divided into four parts: First, we present theoretical perspectives of collective memory and trauma. We then turn to the construction of cultural memory of the Holocaust in Israel. The third section examines the socio-political space of the Coalition of Women for Peace, offering a rich description of its constituent groups, their value orientations, and activities. The fourth part, which forms the core of the chapter, centers on the CWP and the Holocaust, and presents the somewhat ambivalent analogies made by the women activists between the Holocaust and the current phase of the Israeli-Palestinian conflict, while identifying the various themes that dominate the specific Holocaust discourse that has evolved among these women.

The issue of abortion lies at the very heart of a public-political debate which disowns women of their own bodies. This book analyzes how the feminist struggle for the right of women to have an abortion was created under a power struggle and took form according to the cultural, social, and religious climate, at the local, global and historical levels. Through a comparison of policies of various authorities around the world and the influence of the feminist movement’s activity on abortion legislation, this book presents the situation in Israel and recounts the struggles that shape the discourse and ideology underlying the existing abortion law.

Based on primary sources of the process of formulating Israel’s abortion law, and using empirical data, the author demonstrates how the presence of “woman” is muted and often absent from the discourse and therefore is not a decisive factor in shaping legislation in Israel. As a response to this omission, the author presents the stories and experiences of women as a significant focus for the examination of the efficiency of the existing law in relation to women with an unwanted pregnancy.

Is Israeli society today there is a false consciousness that assumes the Israeli abortion law is permissive, stemming from a global trend towards gender equality; In fact, the opposite is true – the abortion debate is silenced from the centers of liberal feminist discourse in Israel. This made it possible for the existing law to regulate and control female reproduction for demographic and governmental needs, while gender politics is preserved and reproduced.

Labor Zionism, the State, and Beyond: An Interpretation of Changing Realities and Changing Histories
pp. 1-27(27)
Author: Cohen, Mitchell

Does Israel Have a Navel? Anthony Smith and Zionism
pp. 28-49(22)
Author: Berent, Moshe

The Women of the Wall: A Metaphor for National and Religious Identity
pp. 50-70(21)
Author: Lahav, Pnina

The Politics of Emotion: A Case Study of the Israeli-Palestinian Conflict
pp. 113-129(17)
Author: Gold, Dana

How do women in conservative religious movements expand spaces for political activism in ways that go beyond their movements’ strict ideas about male and female roles? How and why does this activism happen in some movements but not in others? Righteous Transgressions examines these questions by comparatively studying four groups: the Jewish settlers in the West Bank, the ultra-Orthodox Shas, the Islamic Movement in Israel, and the Palestinian Hamas. Lihi Ben Shitrit demonstrates that women’s prioritization of a nationalist agenda over a proselytizing one shapes their activist involvement.

Ben Shitrit shows how women construct “frames of exception” that temporarily suspend, rather than challenge, some of the limiting aspects of their movements’ gender ideology. Viewing women as agents in such movements, she analyzes the ways in which activists use nationalism to astutely reframe gender role transgressions from inappropriate to righteous. The author engages the literature on women’s agency in Muslim and Jewish religious contexts, and sheds light on the centrality of women’s activism to the promotion of the spiritual, social, cultural, and political agendas of both the Israeli and Palestinian religious right.

Looking at the four most influential political movements of the Israeli and Palestinian religious right, Righteous Transgressions reveals how the bounds of gender expectations can be crossed for the political good.

LIHI BEN SHITRIT is an assistant professor in the School of Public and International Affairs at the University of Georgia.

As with religious women’s quest to create inclusive faith communities, which in Plaskow’s assessment means allowing “the words of women to rise out of the white spaces between the letters in the Torah as we remember and transmit the past through the experience of our own lives,” women’s peace work takes place in unmapped white spaces. Their religious experience, exemplified by a Muslim woman’s story of a holy mother standing watch, invites us to reconsider our understanding of community and the meaning of peace and security – a reconsideration that is enriched when Palestinian women’s activism is analyzed with reference to Jewish feminist theology.
As demonstrated in this essay, the two fall into natural dialogue, articulating perspectives that are absent from secular conversations on women’s peacemaking. The questions raised by their life experiences as women of faith – on the nature of female participation in justice struggles, on the politics of space, on the relationship with the land, on interpersonal encounter – demand a change in language and a more holistic analysis of the issues at stake.

Since the end of the Cold War, the quest to spread democracy has become the rallying call of many Western donor agencies. Reflecting this new agenda, new program priorities prevailed that placed greater emphasis on civil society development, civic engagement and gender empowerment. Contrary to expectations, however, many of these programs have often adversely affected existing social movements. Most scholars attempting to explain these unintended outcomes have focused on the impact of NGO professionalization. Examining the Palestinian women’s movement, this article addresses the inadequacy of this explanation and focuses on the political dimension of this discussion by illustrating how Western donors’ lack of understanding of the Palestinian women’s movement and its “embeddedness” in the broader political context served to weaken and undermine this movement. The influx of Western donor assistance in the post-Madrid, post-Oslo era, along with the greater emphasis on Western promoted gender empowerment, undermined the cohesiveness of the women’s movement by exacerbating existing political polarization (that went beyond Islamist and secular divisions) and disempowering many grassroots activists. Effectively, many of these activists were transformed from active political participants involved in their organizations to the recipients of skills and services in need of awareness raising. Findings in this article also speak to current regional developments, especially in light of the current Arab uprisings and the promise of greater Western involvement to empower women in the region.

Daniele, Giulia. Women, Reconciliation and the Israeli-Palestinian Conflict. The Road Not Yet Taken. Abingdon: Routledge, 2014. 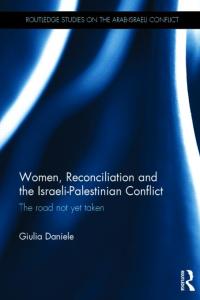 Women, Reconciliation and the Israeli-Palestinian Conflict explores the most prominent instances of women’s political activism in the occupied Palestinian territories and in Israel, focussing primarily on the last decade. By taking account of the heterogeneous narrative identities existing in such a context, the author questions the effectiveness of the contributions of Palestinian and Israeli Jewish women activists towards a feasible renewal of the ‘peace process’, founded on mutual recognition and reconciliation.

Based on feminist literature and field research, this book re-problematises the controversial liaison between ethno-national narratives, feminist backgrounds and women’s activism in Palestine/Israel. In detail, the most relevant salience of this study is the provision of an additional contribution to the recent debate on the process of making Palestinian and Israeli women activists more visible, and the importance of this process as one of the most meaningful ways to open up areas of enquiry around major prospects for the end of the Israeli-Palestinian conflict.

Tackling topical issues relating to alternative resolutions to the Israeli-Palestinian conflict, this book will be a valuable resource for both academics and activists with an interest in Middle East Politics, Gender Studies, and Conflict Resolution.

Part I: Ethno-Nationalism and Women’s Activism From a Critical Viewpoint

4 Parallelism and Inextricability of Women’s Narratives in Palestine/Israel

This study explores how religious women become legitimate actors in the public sphere and analyzes their agency—its meanings, capacities, and transformative aims. It presents a novel case study of Israeli Modern-Orthodox Agunah activists who engage in highly politicized collective feminist resistance as religious actors working for religious ends. Embedded in and activated by Orthodoxy, they advocate women’s rights to divorce, voicing a moral critique of tradition and its agents precisely because they are devoutly devoted to them. Such political agency is innovatively conceptualized as “devoted resistance”: critique within relationship, enabled by cultural schema, and comprising both interpretive skills and “relational-autonomy” capacities. This study contends that understanding agency within religious grammars reveals its underlying logics, highlighting how structures shape the meanings and realization of women’s varied “agentive capacities.” It challenges current dichotomies like feminism/religion, resistance/submission, and autonomy/dependence. Overall, the author argues for a nuanced, culturally specific, capacity-based, relational approach to analyzing religious women’s agency.