Cochran, Shawn T. “Israel in Lebanon (1982–1985).” In his War Termination as a Civil-Military Bargain. Soldiers, Statesmen, and the Politics of Protracted Armed Conflict (Basingstoke and New York: Palgrave Macmillan, 2016): 71-93. 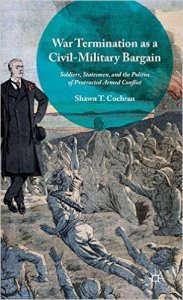 The Lebanon War of 1982–85, generally recognized as the sixth Arab-Israeli conflict, was the longest and most divisive war in Israel’s history, producing “a level of polarization in Israeli society not seen since the birth of the state.” Israel did not anticipate a lengthy war at the outset nor did this appear likely in the early stages of the conflict. After only a week of fighting, Minister of Defense Ariel Sharon announced to the Knesset Defense Committee, “The job is done in Lebanon,” a claim with some parallels to President George W. Bush’s “mission accomplished” statement made in relation to Iraq two decades later. Contemporary observers were quick to claim Israeli victory and tout the operation as a military success. Israel Defense Forces (IDF) General Avraham Tamir would later recall, “Nobody in Israel could imagine at that moment that the IDF would withdraw only three years later after what was meant to be a swift operation.” Over the next few months, however, Israel became embroiled in a protracted struggle with guerilla forces and terrorists as it tried to translate early military gains into desired political objectives. Pundits labeled the war a “quagmire” and “morass.” One popular Israeli commentator likened the IDF in Lebanon to Napoleon’s army in Russia. Whatever the reference, apparent by the fall of 1982 was that “Israel was in for a long and dark nightmare from which there was no simple escape.”

Because of the flaws, limits, or political impossibility of some of these options, the status quo may be the best of a bunch of poor choices. Nevertheless, given the problems with Israel’s current approach and the paucity of good alternatives, some changes are necessary. The analysis suggests the importance of helping moderate Palestinians govern more competently and become politically stronger: currently they are on the path to political irrelevance. In addition, the world should offer pragmatists in Hamas political opportunities, giving them another path to success beyond violence. Finally, options that offer small changes in the status quo deserve consideration. Such steps would, over time, enable Israel to take more risks and allow everyone to move beyond the current stalemate