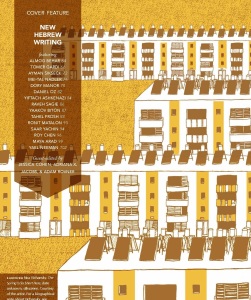 To Jaffa (pp. 73-75)
Ayman Sikseck and Translated by Evan Fallenberg

Master of the Short Story (an excerpt) (pp. 99-101)
Maya Arad and Translated by Jessica Cohen

This essay offers a site-specific reading of Jaffa Slope Park, a newly opened public space on the city’s coastal border, in relation to both Ajami, the largely Arab neighborhood upon whose ruins it was built, and Ayman Sikseck’s memoiristic novel, To Jaffa (Hebrew, 2010). The park is analyzed in relation to Hebrew literary history. Analyzing the production of Palestinian memory within Israeli culture allows us to rethink memory in a transnational setting, and to consider how the Nakba is remembered across different discursive realms shaped by geography, history and language.

Hebrew unified Jews from disparate countries and ethnic backgrounds as part of Israel’s nation-building process; consequently, linguistic mastery of the Jewish language served as the sine qua non of social mobility. Arab citizens living within the new state were caught in this wide net; knowing Hebrew and becoming familiar with secular Jewish Israeli culture was a precondition for advancement and integration. In time, Arab writers, such as Emile Habiby, would write in Hebrew, which like Jewish writers in Israel who continued to write in their mother-tongue Arabic, confronts what Lital Levy has described as the conventional binaries of Israel: “Hebrew Arabic, Arab and Jew.” By disrupting these traditional dichotomies, writers “engage translation inside their texts as a creative alternative to barking, as a mode of resistance to the authority that has displaced them from their pasts and their homes.” This binary division has traditionally assumed that Arab means Palestinian, and is separate from Israeli, which implies Jewish; but two young writers, the prolific and widely known Sayed Kashua, and the first-time novelist Ayman Sikseck, offer a new hybrid identity in which the Arab-Israeli (non-Jewish Arab citizens of Israel) casts off the polar division the two options represent, and instead these writers present a third path. Rejecting the isolated position of the Arab within Israel, and arguing his increasing assimilation in the twenty-first century through mastery of language, integration within the education system, changing social values and economic status, as well as a radical reformulation of political values, the hybrid identity offers ways in which a generation of Arabs coming of age within Israel have staked out a cultural and intellectual space that confounds previous categorizations.

The history of Arab writers using Hebrew has been viewed within a framework of post-colonial criticism in which writing in Hebrew is deemed an act of protest. Arab-Israeli writers are considered to produce minor literature: literature by a minority in the language of a majority. This position assumes, as Hanan Hever has shown in his study of Anton Shammas’s novel Arabesques, that Arab-Israeli authors de-familiarize and de-territorialize Hebrew by separating it from its Jewish identity while simultaneously opening up space within Hebrew for the Arab-Israeli.Writers such as Shammas and Habiby satisfy the criteria of writing minor literature that Gilles Deleuze and Felix Guattari consider an act of dissent by the colonised protesting against established hierarchies of power. Arab-Israeli writers, moving between Hebrew and Arabic in poetry, prose, political writing, and journalism have established Hebrew as a space of “otherness,” creating a distance in representations of self. In an Israeli context, Hever has argued that Arab minor literature, in Hebrew, “invades and subverts the majority culture,” whereby Arab writers, as Lawrence Silberstein elucidates, “problematize and subvert the dominant Zionist/Israeli conception of Hebrew literature as Jewish literature and Israeli culture as Jewish culture.”