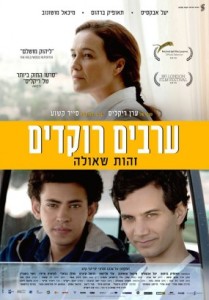 Winner of the 2015 WJFF Audience Award for Best Feature! (Dir. Eran Riklis (104min, Israel/Germany/France, 2014) Hebrew and Arabic with English Subtitles.This bittersweet ‘80s coming-of-age drama from the director of The Syrian Bride and Lemon Treeadapts two autobiographical novels by popular Israeli-Arab writer Sayed Kashua. Eyad is a gifted Arab teenager who wins the chance to attend a prestigious Jewish boarding school.  Post-screening discussion with American University Global Scholar Daniel Munayer, an Israeli Christian Arab who grew up in Jerusalem, and Maram Masarwi, a post-doctoral fellow at the Free University of Berlin who was head of the Early Childhood Education Department at Al Qasemi College of Education in Israel.  Co-Sponsored by the Washington Jewish Film Festival, Greater Washington Forum on Israeli Arab Issues and The Center for Israel Studies at American University.

This article examines the ways in which Alon Hilu undermines conventional literary representations of the Arab in The House of Rajani , offering alternative possibilities for contact and communication between Jews and Arabs. The division of the text between two narrators, each of whom reflects a distinct viewpoint, represents the contrast between the Zionist world of the First Aliyah and the Arab world of people who had dwelled in Palestine for generations. Hilu returns to Palestinian history in order to situate the experience of Arab exile center stage. Not only does Hilu read national history and the place of the Arab within it anew, but he signals the instability of national categories, their tendency to merge and thereby to create an intermediate space. The Arab in Hilu’s novel is immeasurably more complex and interesting than the familiar Arab as imagined by Hebrew and Israeli fiction in the past. He is understood through a lens of post-colonialism inconsistent with the dominant Israeli historiography and his human and collective experiences are presented with unprecedented power.

This article identifies key characteristics of sovereign Israeli Jewish identity and its relationship with space in Israeli novels and novellas published between 1967 and 1973, in the context of the complicated dialogue between these texts and Israeli public discourse. Interacting with their contemporary public discourse, the canonical novels and novellas of the period—Michael Sheli [My Michael] by Amos Oz (1968), Nemalim [Ants] by Yitzhak Orpaz (1968), and Hapardes [The Orchard] by Benjamin Tammuz (1972), create an Israeli space in which a Jewish sovereign is surrounded and threatened by an Arab enemy, and as a precondition to his survival, must renew his sovereignty and declare a state of emergency to confirm it. As opposed to the besieged space constructed in contemporary discourse and in these canonical novels, David Shahar’s novels of the period construct a fluid space in which contrasting identities can shift and replace each other with no existential threat.

Israeli photography in its broader sense began with the Zionist resettlement of the Land of Israel in the late nineteenth century. Israeli photography can be divided into two stages: the early one, in which it reflected solidarity with the Zionist cause, and the contemporary stage, in which it has become highly critical of it, at times with evident sarcasm. Yet, to date, the watershed separating the one stage from the other has not been defined. By analysing developments in Israeli public life and culture, the article shows that the first few months of the 1982 war in Lebanon, which shattered the Israeli national consensus, found their immediate reflection in Israeli photography. During the 1980s Israeli photography became transformed, as the iconic images focusing on the Zionist hero were replaced by the images of those who were generally overlooked, the Palestinians in particular. This new image is defined as a “reversed icon”.