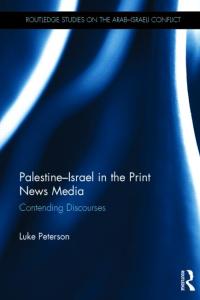 Israel-Palestine in the Print News Media: Contending Discourses is concerned with conceptions of language, knowledge, and thought about political conflict in the Middle East in two national news media communities: the United States and the United Kingdom.

Arguing for the existence of national perspectives which are constructed, distributed, and reinforced in the print news media, this study provides a detailed linguistic analysis of print news media coverage of four recent events in the Palestinian-Israeli conflict in order to examine ideological patterns present in print news media coverage. The two news communities are compared for lexical choices in news stories about the conflict, attribution of agency in the discussion of conflict events, the inclusion or exclusion of historical context in explanations of the conflict, and reliance upon essentialist elements during and within print representations of Palestine-Israel. The book also devotes space to first-hand testimony from journalists with extensive experience covering the conflict from within both news media institutions.

Unifying various avenues of academic enquiry reflecting upon the acquisition of information and the development of knowledge, this book will be of interest to those seeking a new approach to the Palestinian-Israeli conflict.

Introduction: Language and the Printed News

5 Evacuating Gaza from Two Sides of the Atlantic

9 The Journalistic Perspective: Covering Palestine-Israel in their own Words