Bloch-Elkon, Yaeli, and Jonathan Rynhold. “Israeli Attitudes to the Obama Administration.” In US Foreign Policy and Global Standing in the 21st Century: Realities and Perceptions (ed. Efraim Inbar and Jonathan Rynhold; Abingdon and New York: Routledge, 2016): 248-66. 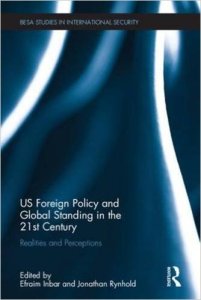 Overall, the polls show that Israelis strongly support the United States, while also being very critical of the Obama administration’s Middle East policies. More specifically, the findings are that Israelis overwhelmingly view the relationship with the United States as vital to Israeli security. Indeed, they rank it as more important than any factor other than Israel’s own military capabilities. They also clearly view the United States in general as a reliable ally of Israel. However, Israelis are evenly divided as to whether Obama’s approach to Israel is a positive one, and, even more significantly, a clear majority of Israelis view Obama’s policies in the Middle East in a negative light. This is true for the administration’s policies toward the Islamic State in Syria and Iraq (ISIS), the Iranian nuclear issue, and the Israeli-Palestinian process.