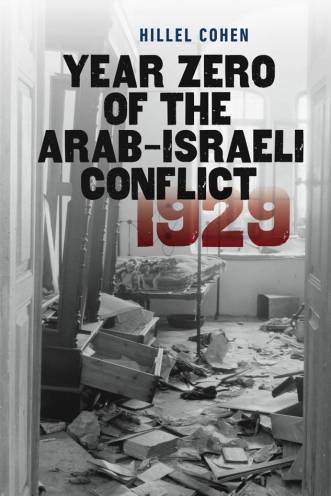 A new and provocative reassessment of the origins of the Arab-Israeli conflict.

In late summer 1929, a countrywide outbreak of Arab-Jewish-British violence transformed the political landscape of Palestine forever. In contrast with those who point to the wars of 1948 and 1967, historian Hillel Cohen marks these bloody events as year zero of the Arab-Israeli conflict that persists today.

The murderous violence inflicted on Jews caused a fractious—and now traumatized—community of Zionists, non-Zionists, Ashkenazim, and Mizrachim to coalesce around a unified national consciousness arrayed against an implacable Arab enemy. While the Jews unified, Arabs came to grasp the national essence of the conflict, realizing that Jews of all stripes viewed the land as belonging to the Jewish people.

Through memory and historiography, in a manner both associative and highly calculated, Cohen traces the horrific events of August 23 to September 1 in painstaking detail. He extends his geographic and chronological reach and uses a non-linear reconstruction of events to call for a thorough reconsideration of cause and effect. Sifting through Arab and Hebrew sources—many rarely, if ever, examined before—Cohen reflects on the attitudes and perceptions of Jews and Arabs who experienced the events and, most significantly, on the memories they bequeathed to later generations. The result is a multifaceted and revealing examination of a formative series of episodes that will intrigue historians, political scientists, and others interested in understanding the essence—and the very beginning—of what has been an intractable conflict.

HILLEL COHEN is a senior lecturer in the Department of Islam and Middle East Studies, The Hebrew University of Jerusalem.

Introduction
Chronological Overview of the Events
Casualties in the 1929 Riots