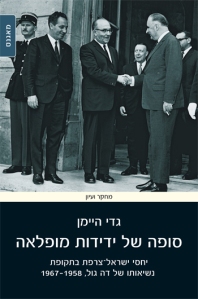 Τhis book unfolds one of the most interesting chapters in the history of Israel’s foreign policy. Since the Sinai campaign (1956) France had been a friend and an ally of Israel. It supplied Israel with advanced weapons to maintain the balance of powers in the Israeli-Arab conflict, provided crucial political and economic aid, and assisted in building the nuclear reactor in Dimona. The return of Charles de Gaulle to power in 1958, against the background of the Algerian War, presented a challenge for Israeli leadership: in light of the new French president’s determination to renew the influence of France in the Arab world – could Israel preserve its friendly alliance? The book deals with the efforts of Israeli statesmen, politicians and officials to attain this goal. It also discusses the uncompromising policy of de Gaulle to regain a status of a world power for France and the implications for his relation to Israel. The book sheds new light on a puzzle that has occupied many commentators, and still remains very much unresolved: why did de Gaulle decide to give a cold shoulder to Israel in May 1967, as it faced one of the most difficult challenges in its history, and why did his reticent policy intensify after the Israeli victory in the Six-Day War.